But first, coffee. If you need a little morning caffeine boost, look no further than the art of Josh Hara (@yoyoha). His #100CoffeeCups project put a whole new spin on the term 'artisanal coffee'. The goal was to draw on 100 coffee cups, and he ended up losing count around - *drum roll* - the 300th. His caffeine-fueled art has been featured all over the internet and makes scrolling through his Instagram feed as addictive as coffee itself. Grab a cup o' Joe and read all about Hara's art from cups to kicks!

First things first, tell us a little bit about yourself! Do you do art for a living?

Well, sort of. I am a creative director at a large marketing agency. My role at work is centered on writing more than design these days. But creative work is creative work, and that’s why I work hard outside of work to keep drawing cartoons or filling up sketchbooks during meetings. It helps keep my mind in a creative space at all times. 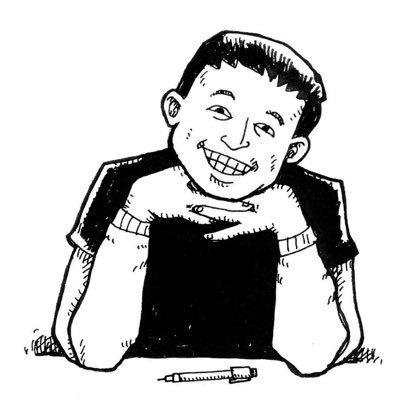 I have to ask...what's your favorite Starbucks order?

A Venti Americano is my absolute favorite. But because I’m cheap as hell, I usually save myself a buck and get brewed coffee. 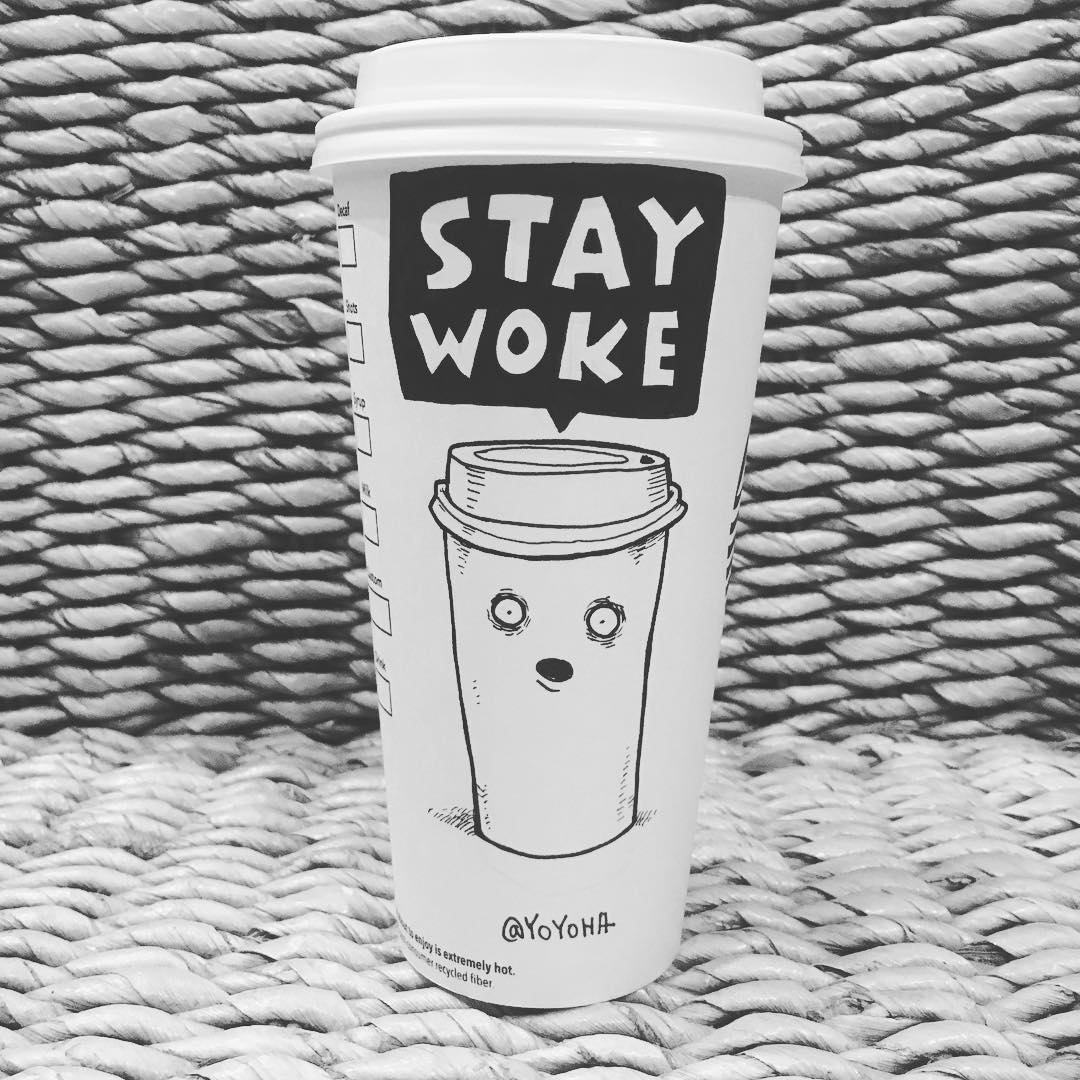 What inspired your #100CoffeeCups challenge?

If you look back at my Instagram feed, I had toyed with the idea a few times. But ultimately, I had always admired the pristine surface of the Starbucks cup. It was smooth, perfectly white, and just aching to be decorated. One day, I saw that Shia LaBeouf showed up at a red carpet event with a bag on his head that said, “I AM NOT FAMOUS ANYMORE.” So, I promptly created my coffee cup version and posted it on Instagram. At the time, it was more of a one-off, but a few days later I created another one, and then another. Then a well-known Twitter personality and friend, Kelly Oxford, had left a comment on a Facebook post that I was on to something. So, I kept going. 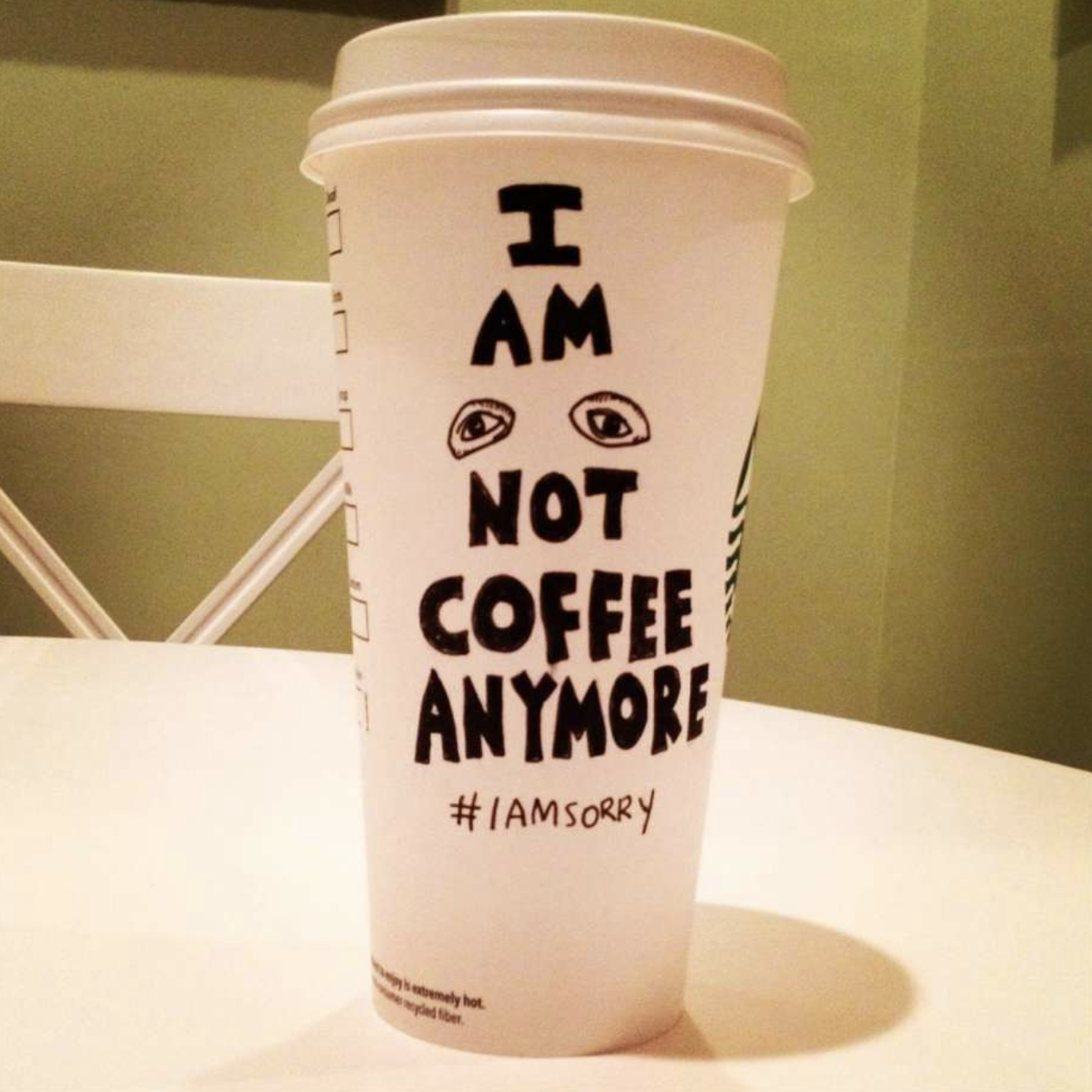 Was drawing on a curved surface a challenge at first? How long does a typical coffee cup drawing take?

The difficulty of drawing on the cup was something I used to my advantage at first. I used to draw something, scan it into Photoshop, clean it up, colorize it, and by the time it was ready to post, the moment was gone. The curved surface gave me permission to not obsess over imperfections. It’s on the side of a coffee cup – if it looks like shit or a line falls out of place, who cares.

Was your Bucketfeet design "100 Coffee Cups" originally ON a coffee cup?

Well, sort of. There was a “spot the panda” meme that was going around the Internet a few years ago, so I created my version with a panda hiding in a sea of coffee cups. After making that, I loved that pattern and decided to transfer it to a flat surface. Once I connected with Bucketfeet, it felt like the perfect design for the shoes. 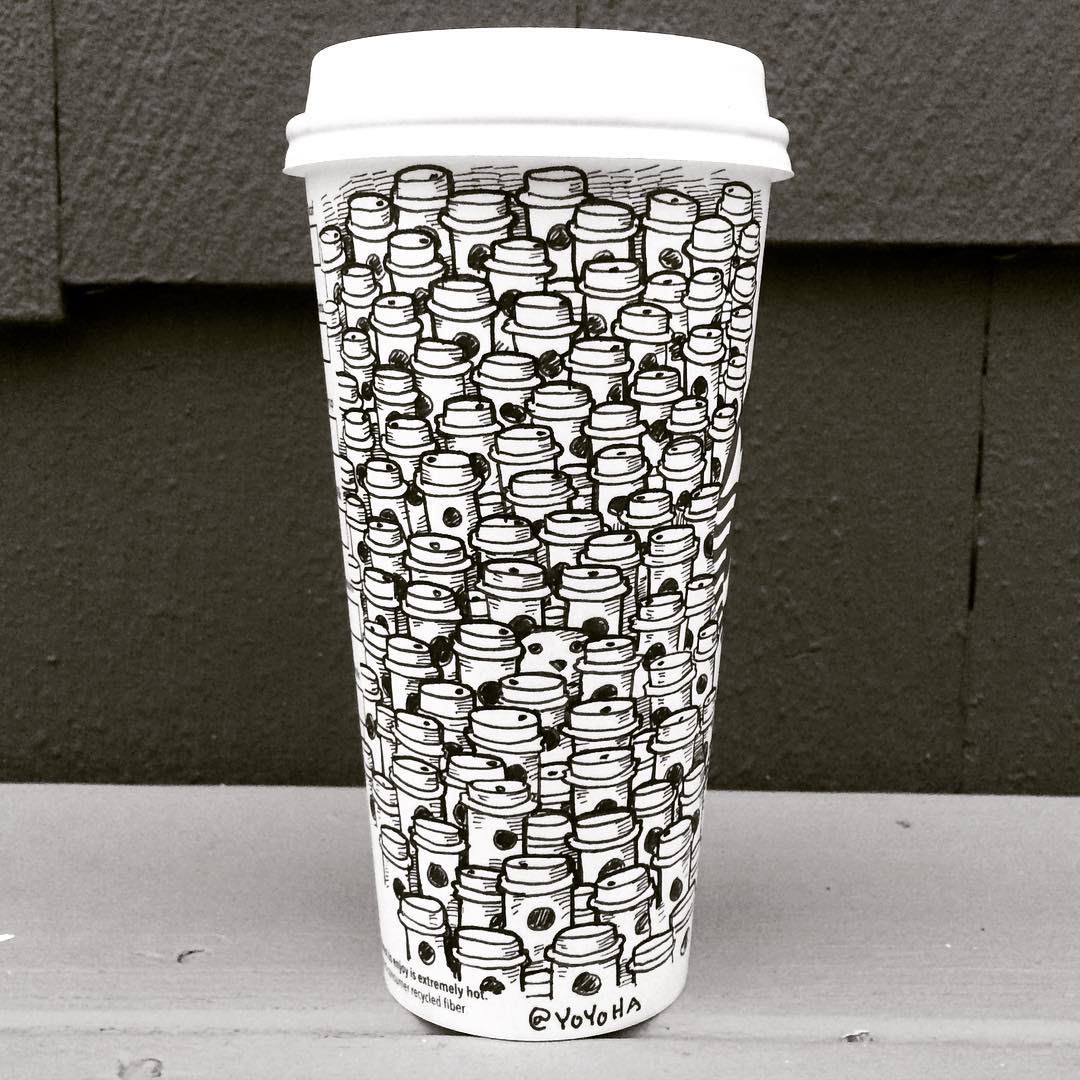 You've drawn on coffee cups, your work is on shoes - what other unusual canvases have you or do you want to work with?

Earlier this year I was hired to participate in the #OneTimeInNewOrleans campaign in celebration of NOLA’s upcoming 300th birthday. For that project I drew on their famous Go-Cups; they were these bright white glossy plastic – not easy. I had to use fine tip sharpies and there was very little room for error. 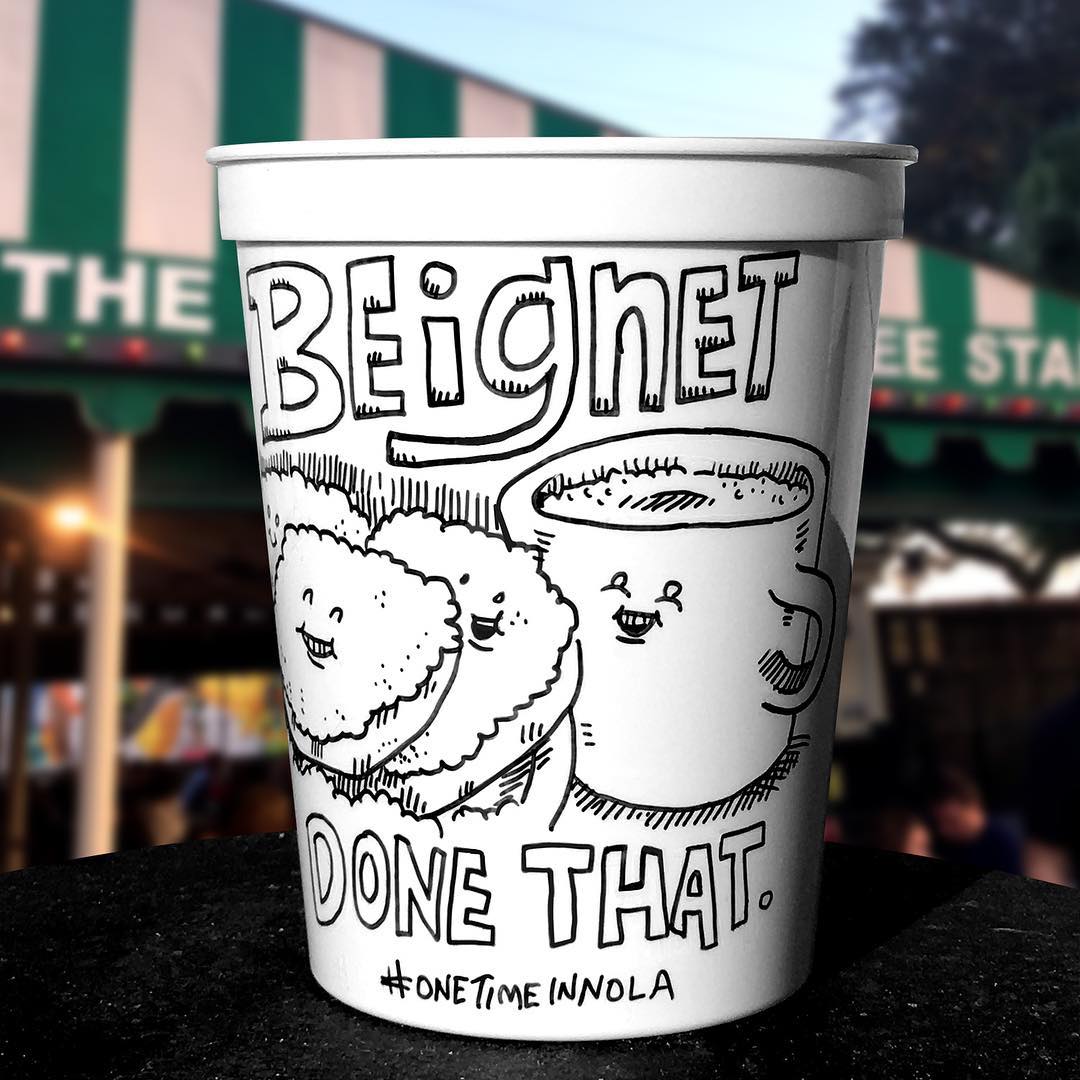 You set out to draw on 100 coffee cups - how many have you drawn on total?

After I eclipsed 300 cups last year, I stopped counting. Probably at least 400 by now, probably more. Do you have a favorite coffee cup drawing?

There are several I’ve done that I love, but I’d say the perfect cup was either “Caffeinating the Internet” - parody of the famous Kim Kardashian “Breaking the Internet” magazine cover. Or, “Coffee: When Your Brain Needs a Hug.” 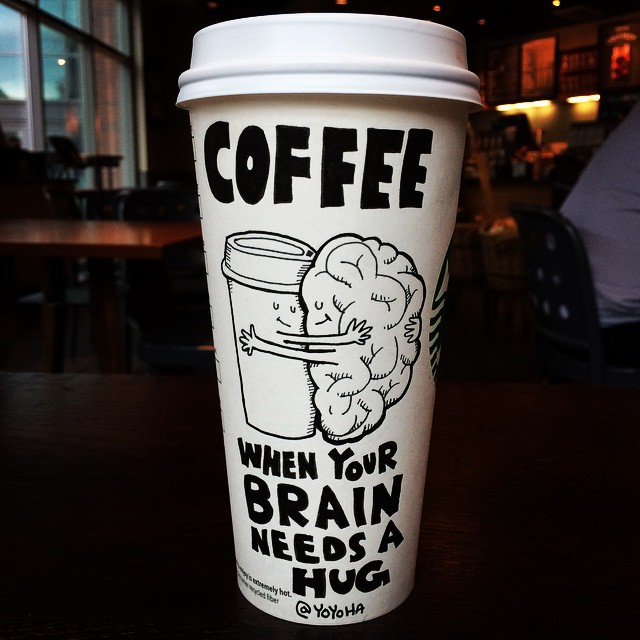 What are your favorite tools of the trade?

Faber-Castell PITT pens, Pigma Microns, Staedler non-photo blue pencils (for sketching) and a Uniball Vision is in my pocket at all times for notes and sketchbook stuff. 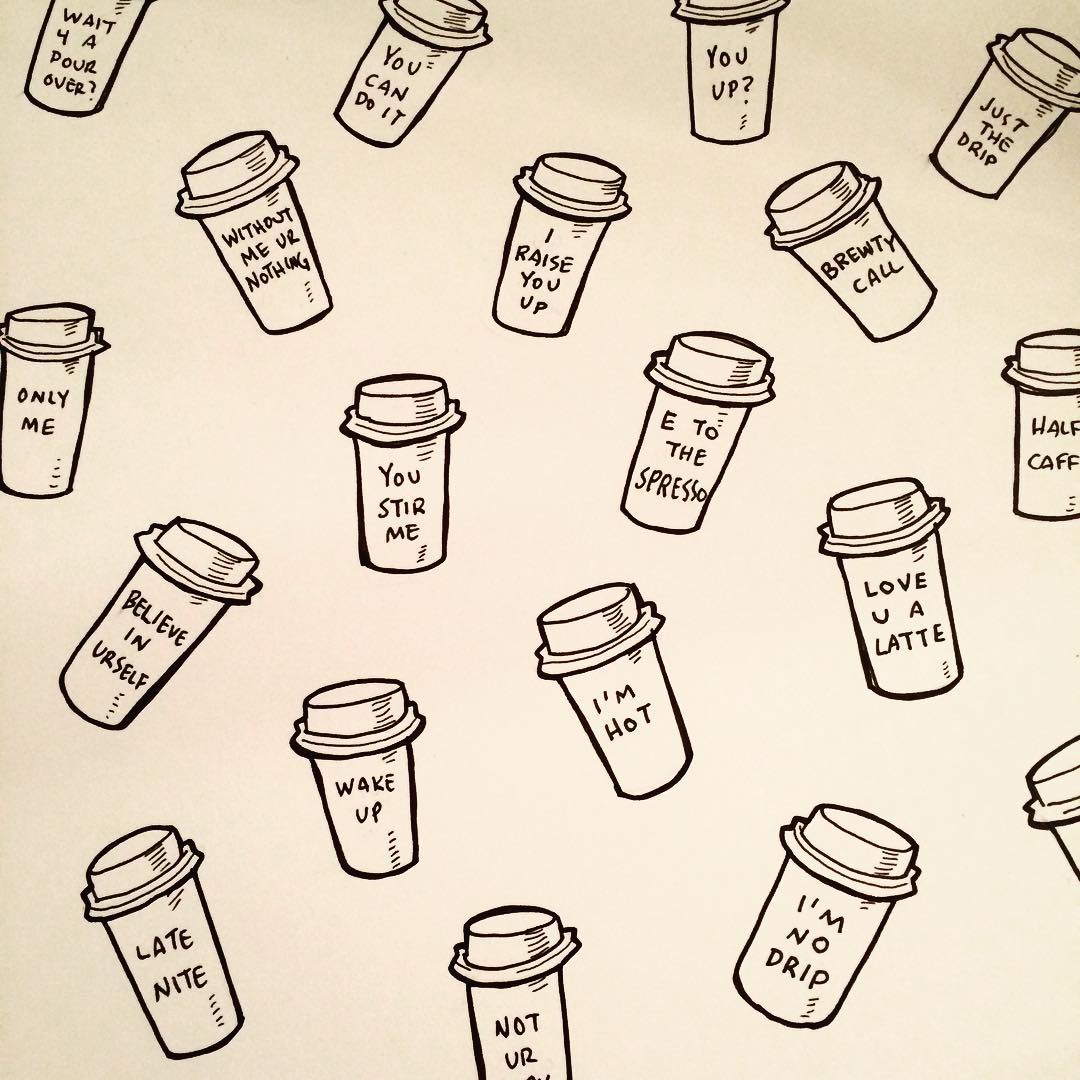 Talent isn’t a gift. It’s love. When you love something, you make time for it. And the more time you spend making art, the better you get at it, and the more freedom you have to follow your inspirations and pluck ideas out of the sky. Children are always told they can be anything they set their mind to, and that is 100% true. What they don’t tell you is just how hard it is to set your mind to one thing or that the statement only holds true if the thousands of hours of work it takes to be that thing is fulfilling to you. When the work starts to feel like work, most people lose interest and set their minds to something else. 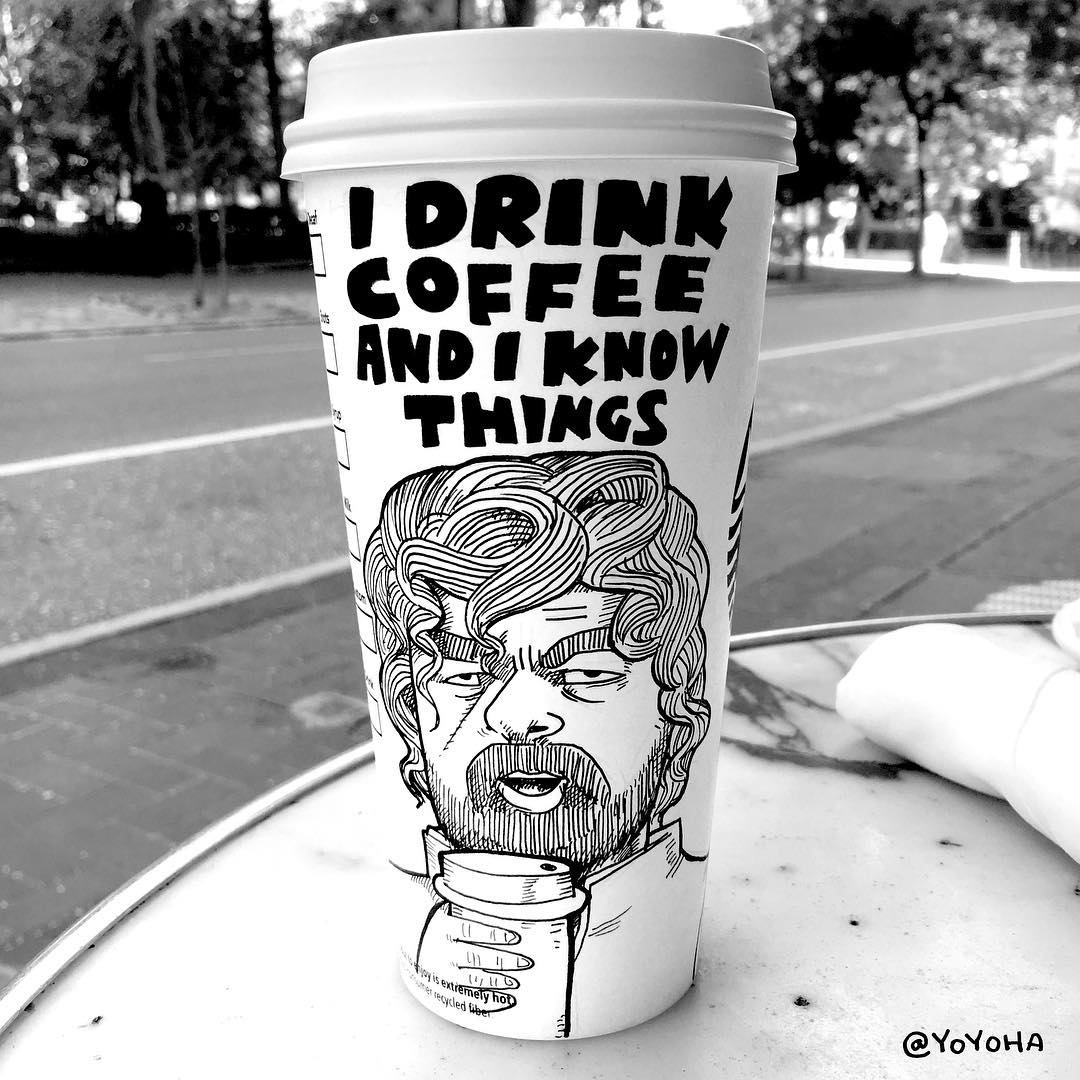 I honestly don’t know. I’ll keep doing cups, of course, but I’m on a constant hunt for whatever the next thing will be. I love creating art for apparel, greeting cards, traditional comics, maybe a book? It usually depends on which way the wind blows, and how much caffeine I have in my system. Which is usually a lot.